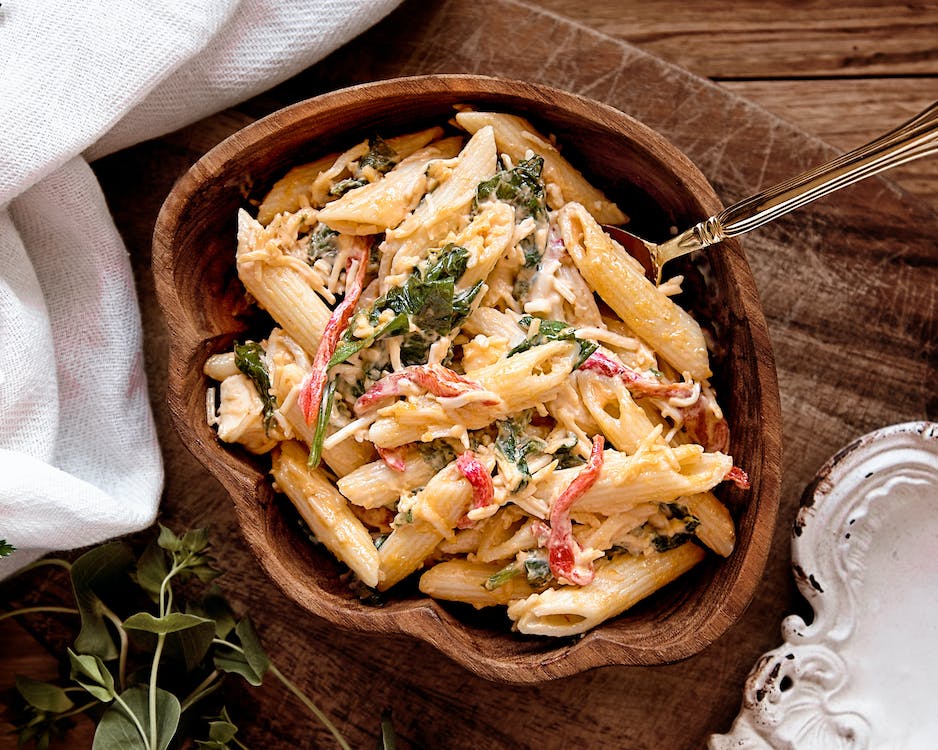 Pasta is a staple food of traditional Italian cuisine, which now serves as a popular source of complex carbohydrates in many parts of the world.

Pasta, meaning “paste” or “dough” in Italian, is made predominantly from flour starch, and water and describes thousands of extruded foods including macaroni, spaghetti, lasagna, vermicelli, and noodles.

The dough is made mostly from durum wheat or, buckwheat flour, with water and, sometimes, eggs.

It comes in a variety of different shapes that acts as a carrier for the different types of sauce and foods.

Durum flour’s higher protein content makes it best suited to withstand the pressures of mechanical kneading and manipulation during commercial pasta production and the heat during preparation.

The protein in durum wheat flour gives the pasta its elasticity and helps it maintain its shape during cooking.

Durum wheat is also higher in carotenoid pigments, which contribute to pasta’s rich, golden color. The yellow color may also be derived from egg yolks, which are a common ingredient in pasta.

Most pasta manufactured in North America is also enriched with several B vitamins and iron.

Pasta is categorized into two basic styles: dried and fresh.

Dried pasta made without eggs can be stored for up to two years under ideal conditions, while fresh pasta will keep for a few days under refrigeration.

There are over 600 pasta shapes now in existence, but only about 150 are available in North America.

“Long goods” such as spaghetti and linguinea are most commonly consumed (41%), followed by “short goods” such as macaroni (31%) and noodles (15%), and specialty items such as lasagna and manicotti (13%).

Before pasta being dried in various shapes, optional ingredients may be added, such as vegetable purées, as in spinach pasta, and a variety of seasonings. Different types of pasta vary not only in shape but also in their ingredients, which influences the following pasta nomenclature. 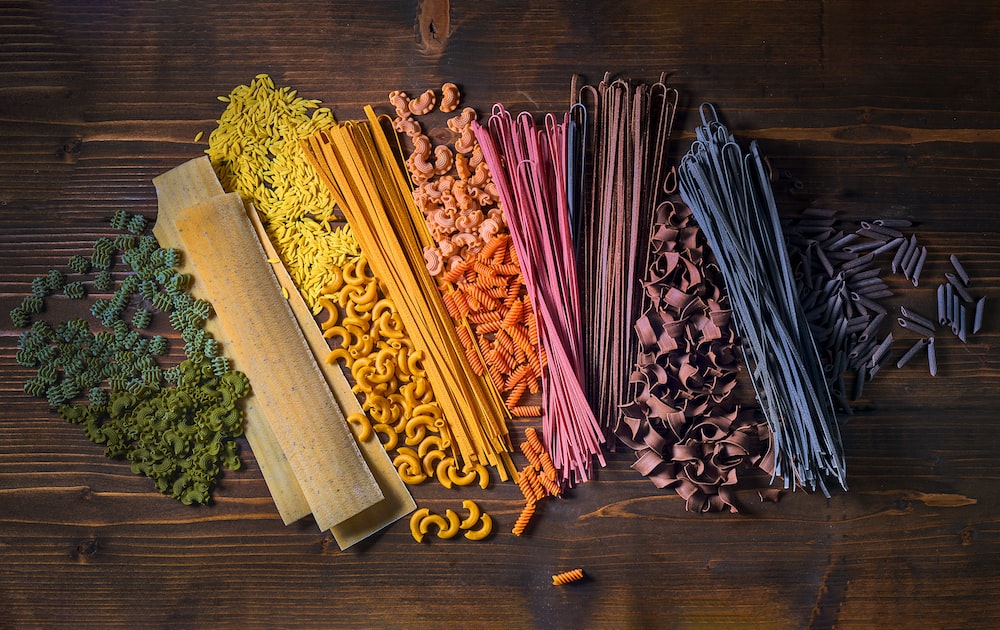 They resembling wheels with spokes. Also known as wagon wheels, the name derives from the Italian word for little wheels. In Ohio, they are called “Choo Choo Wheels”.

The word fusilli presumably comes from fusile, an archaic word for “rifle” referring to the spiral-grooved barrel of the latter. The word can also mean “little” in Italian. In addition to plain white color, other colors can be made by mixing other ingredients into the dough. Eg. beetroot for red, spinach for green, and cuttlefish ink for black. Fusilli may be solid or hollow. Hollow fusilli are also called fusilli bucati.

They are ring-shaped pasta and their alternative name is “belly button”. They are stuffed with a mixture of meat or cheese. Originally from the Italian region of Emilia, they are usually served in broth, either beef or chicken.

5. Noodles:
If eggs are added (at least 5.5% egg by weight), the pasta product is referred to as noodles, although eggless noodles are
available on the market.

Asian Noodles
Asian noodles are often made from flours other than the standard semolina flour or farina, and as a result, are often translucent or clear in appearance. This and the fact that they rarely contain eggs is why they are sometimes called imitation noodles in the West. Asian noodles may be made from rice, mung bean, taro, yam, corn, buckwheat, or potato flour. Examples of Asian noodles are rice, ramen, soba, and bean thread noodles.

Ramen is instant Japanese noodles that have been previously dehydrated by frying, which makes them extremely porous and much more likely to absorb water than regular noodles. Adding water to ramen instantly rehydrates them, making them popular for use in soups and luncheon noodle meals.

It is a form of tube-shaped pasta of varying lengths and diameters. It is larger than penne and ziti and sometimes slightly curved. Rigatoni is usually ridged, and the tube’s end is square-cut like ziti, not diagonal like penne. The word rigatoni comes from the Italian word rigati, which means “ridged” or “lined”.

Commonly known as “shells” or “seashells” is a type of pasta. It is usually sold in the plain durum wheat variety, and also in colored varieties. The shell shape of the pasta is good at catching the sauce.

It is a form of pasta, flat like fettuccine and trenette. It is wider than spaghetti, about 1/4 to 3/8 inch, but not as wide as fettuccine. The name linguine means “little tongues” in Italian. A thinner version of linguine is called linguettine.

It (literally “little ribbons” in Italian) is a type of pasta popular in Roman Cuisine. It is a flat thick noodle made of egg and flour wider than but similar to the tagliatelle. Fettuccine is traditionally made fresh but dried tagliatelle can also be bought in shops.

They are a type of pasta, commonly known as “bow-tie pasta” the name is derived from the Italian word Farfalla (butterfly). Farfalle date back to the 16th century. It originated in Lombardia and Emilia- Romagna in Northern Italy. A larger variation of farfalle is known as farfallone, while there is a miniature version called farfalline.

It is a type of pasta with cylinder-shaped pieces. The hollow center allows it to hold sauce, while the angular ends act as scoops.

The word ravioli is reminiscent of the Italian verb riavvolgere (to wrap). The earliest mention of ravioli appears in the writings of Francesco di Marco, a merchant of Venice in the 14th century. They are composed of a filling sealed between two layers of thin egg pasta dough.

It is a type of helix or corkscrew-shaped pasta, the name derives from the Italian word for “twists”. Rotini is most often made from refined flour. They are often used in pasta salads with tomato-based sauces.

It was brought to Italy by Marco Polo in 1292. Macaroni is a variety of moderately extended, machine-made, dry pasta made with durum wheat. Macaroni noodles do not contain eggs and are normally cut in short, hollow shapes.

They are cylindrical-shaped pasta. It is generally served baked with a filling and covered by a sauce. The stuffing may include cheese, spinach, and meat. The sauces typically used are tomato or béchamel sauce.

It is a type of pasta and the name derives from the Italian word for little rag. Cencioni is oval and petal-shaped, with a slight curve. They are larger and flatter than orecchiette, with a more irregular shape and a rough texture to one side to help sauces cling better. 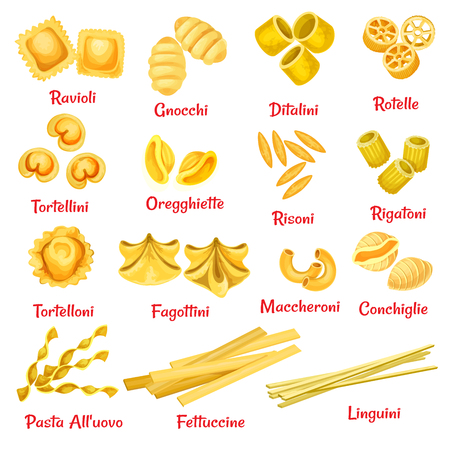 NOTE: Pasta dough is best extruded at 115°F (46°C) because temperatures higher than 140°F (60°C) will denature the protein and reduce the pasta’s quality.
Once pressed through the appropriate die, pasta is cut and then dried until the moisture level drops from 31% to 10 or 12%.